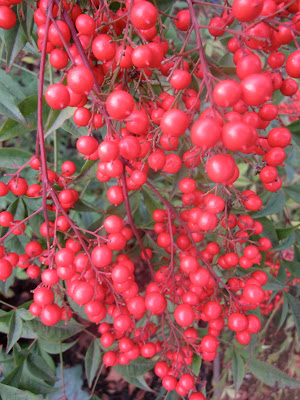 So, I thought I’d ask her
about that famous Tiger guy
he’s been hogging the news lately
How does she feel about
old married men
running around with beautiful women.
(Notice, I don’t tell you what
she’d say.)
That could be the lowered drawbridge
over the moat to her heart
(Pretty girls like that kind of talk, and
nice girls will say they like that kind of talk.)
don’t you see
and she would look at me
and we’d go off to happily
ever-after land.
But everybody knows
I could never ask that
not to someone as beautiful
and nice as she.

FOR EVERY BILL
—Anthony Buccino

I never thought a TV commercial
could make me lose my lunch
instead of going out to buy one.
But those stupid spaghetti ads
that ran every day on TV
Wednesday or not were enough
to make me hate my name.

For every Bill who became a Willie Wonka
for every Chuck who became a Charles Brown
for every Homer who was a doofus
and for every Herb who ain't "that herb",
it’s time now for us to pull the plug.
So many times I wished I was a Tony
but that had been squared away long before.
For now and ever after,
I’m Anthony through and through,
and all the more it makes me hate the Prince.

I know that little kid who ran through Boston
neighborhoods like a flash in the pan
is all grown up and went to college
on royalties from that commercial
but never, ever, say to me,
“Anthony, it’s Prince spaghetti day!”

HOW TO WRITE A POEM
—Anthony Buccino

Unfamiliar with words and how to stack them
One upon the other in long strings that make sense
She asks me how to write a poem
And I’m thinking it’s so easily done
You just put your pen to the paper and let it go
Isn’t it that way it works for everyone?
Poets just hold the pen. The pen adds the words
Wild, strange, familiar, foreign, they all
Flow into the lines to make a point.
How hard can it be to write a poem?

If you’ve never written a poem before
It’s just a matter of settling down somewhere
Where your mind can send the word pictures to your paper
Then another line comes and then another
And when you get to the end of the poem
Somehow you’ll know that’s where you are.

WHERE TO
—Anthony Buccino

She tells me how I’m driving
Tells me my speed, and how long
It will take until we get where we’re going.
She tells me when to stay right
Or bear left one point seven miles,
Then bear right to the highway.
She always knows where I am
But she never listens to me.
No, I’m not talking about my lovely wife
Who does much of the same
Things to help me along,
Reading directions aloud,
Following an unfurled road map.
No this new lady
with her disembodied voice
Speaks to me from the dashboard
Where her suction cup
hugs the steamy windshield.
While I drive, she shows a blue car
Fluttering along the road and ahead
Before I can see it, she shows me
Curves and hidden side streets, too.
All the while she is telling
Me the temperature
My speed and how long
Til we get where I’m going.

When we turn off Main Street
to these convent woods
She senses that the road
has ended and
The blue icon of my car
is now floating along
Without a road below,
floating as if on a cloud
Into the heavenly sanctuary
Of St. Marguerite’s Retreat House.

Then I’ll pluck her from the safety
Of the bracket that stays with the glass
And slip her in my back pocket
Until it’s time to hit the road again.

For a moment, I thought of that picture
we've all seen of an old woman sitting
and looking out a window at the street below.
For a moment, I wondered what it was
she was thinking behind what photographed as a stare:
of her life lived, what she enjoyed, the life missed,
or the cat tail under the rocker leg on which she rocked?
Did she live alone, spend days at the window,
nights in front of an old black and white TV waiting,
once again, for the sound of her children playing,
fighting and yelps of joy when dad arrives?
Did she live vicariously through the view
of people passing by in routine lives
of the hours when school children pass,
or the same people who wait each day for the bus,
and who-parked-where these days?
The moment passed and I went on my way,
forgetting the imaginary woman
at the imaginary window,
no longer caring if she watches for me,
or what happens in her life or with her family,
if any, or who visits and brings her cookies.
As quickly as I thought of her,
I boarded my bus and rode away. 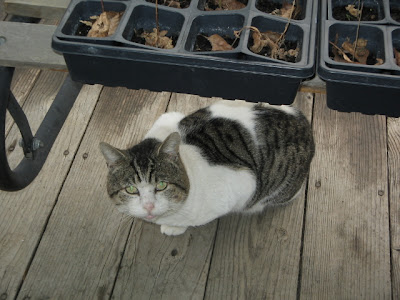 (This poem is a response to Carol Louise Moon's poems
posted on Medusa yesterday.)

Christmas trees gathered on the
cold lot, silent company to the man in the
flannel shirt and suspenders huddled over
propane heat, face chapped from winter.

He had lovingly counted them and unwound
the brown twine and adjusted their beautiful
branches and dreamed for them of the
children sipping sweetness and hanging shiny
globes and tinsel, and singing.

They were still here, on this cold lot, on

Found my list.
Sugar
Eggs
Ginger
Remember to
breathe.
Be charming
Get healthy.
Smile.
Don’t lie
or manipulate.
Be virtuous
and good.
Find strength
and trust.
Don’t look over your
shoulder
or give in to
doubt.
Black pepper
Cinnamon
Bitter chocolate 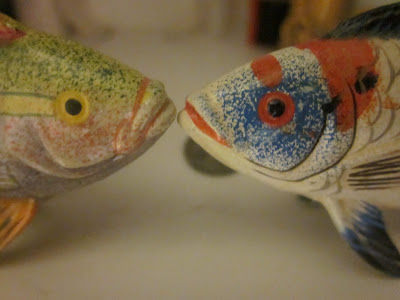 Wooden Fish
Photo by D.R. Wagner
Posted by Kathy Kieth, Wrangler-in-Chief at 12:16 AM