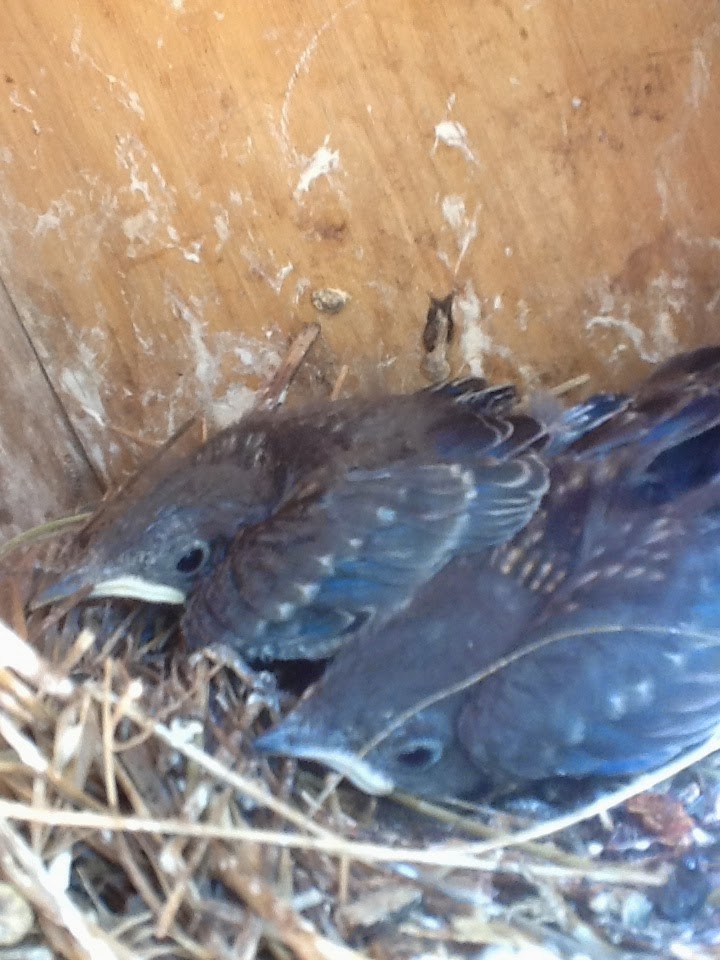 Inside the box, a persistent calling: hunger.
Where is their mother, will she bring a fly,
or a darkling beetle in its larval stage? Will
she dive-bomb me, the intruder, as I gently
open the nestbox door? Inside I see the hard
glow of eyes. Bluebird babies not yet ready
to fledge; waiting for their feathers to grow,
speckled with stars. Knowing I’m here, they
don’t move, not a rustle. Only an intimation
of wind in wings; a memory almost faded
in the nest where they hatched into a life-
sleep, a forgetting. One eye glitters at me
with its secret of stars.

A strange breath, fluid-air
dynamics in the midst of a country store
patronized by unshaven locals and whitewater
rafters put ashore
between the rapid thrills, the energy of snow-
melt testing gravity and fractured rock,
just passing through. Here to somewhere else.
And so was she, but everyone
stopped talking when she walked in,
so namelessly separate,
as if breathing in a different language.
She asked for directions, then went the other
way. After the door swung shut
behind her, blackberries kept ripening
in thickets just up from shore.
But the air was different with a sense
of drowning, or being carried as the river
was always running away.

History lines up its endless exhibits,
this world we keep creating;
more evidence all the time, too many
documents to number. Exhibit:
this woodcut Rhino, faded dun in patterned
armor-plate: the patient form, the sad-
eyed majesty of a creature captured
minding its own business; sailed across seas—
To shorten the synopsis: India to Lisbon,
exhibited to spellbound crowds;
housed in the royal gardens; then, collared
and bound for Rome. But, chained
on deck, how could he swim for his life
as the ship sank—not in battle, but a natural
storm? The jury’s still out on History,
but our beast was famous far beyond his
Rhino-tour; living on in art and story
as exhibit we keep to remember
how strangely beautiful, armored, sad.

it’s all her guardian angel’s fault, for getting her
into so many righteous causes: save the rain-
forest, the frogs; a cup of rice for every starving
child; a sprinkling of ground nutmeg to stimulate
the brain; redeem feral cats for the sake of birds.

For every cause there comes a sequel, a new
scarcity in the land, another endangered species,
ecosystem, way of life. She closes her eyes and
wonders if the sun might rise without her efforts,
and get that do-gooder angel off her case.

Sometimes it sounds like murder—yesterday,
those 3 crows trying to occupy the same space
in the incense cedar, such a flail and flash
of black angel wings. The smallest fixed you
with its guardian crow’s eye and lifted off,
flying east. This morning your angel was that
guy at the co-op who didn’t care about rules &
regs but hoisted a 50# bag of dogfood on his
shoulder and carried it out to your cart.
Don’t guardian angels have an unexpiring
urge and license to help? And now your angel
is silent, the first yellow madia of the year—
tarweed blooming small rayed suns alongside
the freeway on-ramp. Uninvited flower
of derelict places, it promises an end to even
this dry summer. Pure angel-talk. Enigmatic,
changeable, inscrutable, at times you think
misguided. But better than no angel at all. 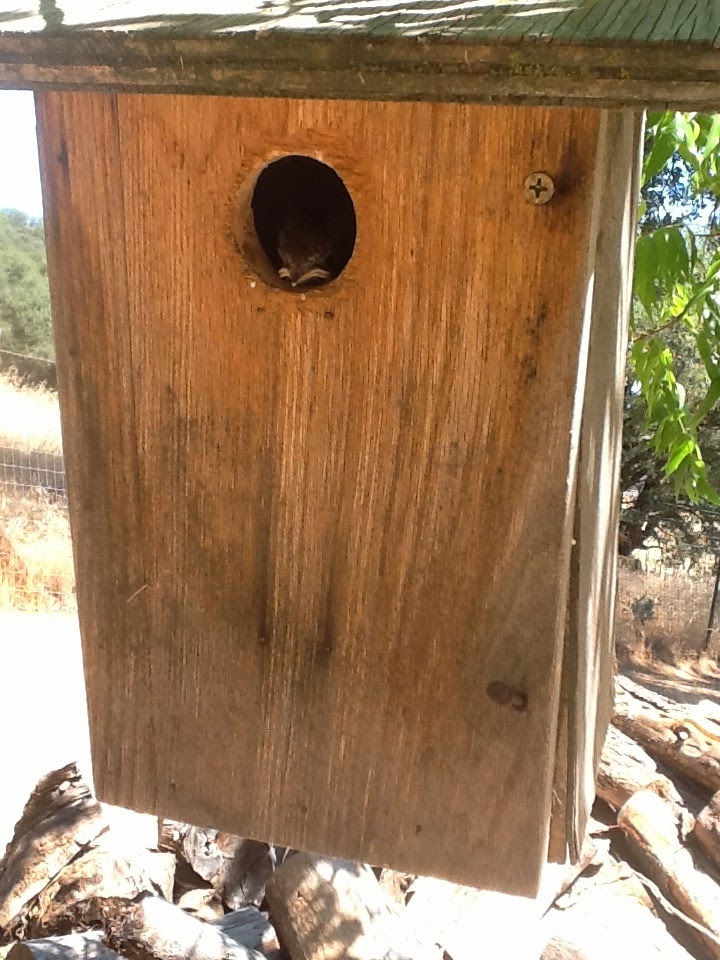 A painting by Blake flashes on the overhead screen.
A Rumi poem: Wave of light builds
in the black pupil of the eye. No one dozes today.

I cannot suppress a giggle as energetic vibrations
from the organist tremble renaissance shades of heirloom
zinnias in the pewter vase on the simple altar.

Next week in our fellowship hall, Turkish students
from the University will provide a meal to celebrate
the end of Ramadan with prayers, dates and lentil soup.

Eggplant I’m told. I add yellow tomatoes and lemon
cucumber, what I would have missed had I not
woke early and wondered where I might find beauty.

My feet are not quantum
nor measured in brown:
boxes, toggles and bones.

Wren catches fortune
in her throat, disturbs,
scatters the wind.

The arena fills with winter rains.
Each clasp repairs, latches
bronze with clean and shine.

The hastened trek brought me
here
my cancelled check keeps me
near.

The borders of Rome never were,
calculations made in error,
turn around, aim the arrow.

She is the brick wall that defines her,
the thin arms under the sari.
She is the madras pattern
of marigold orange and olive green.
She is the littered ground,
the ground scattered with bricks and refuse.
One brick is her table. She entertains
simply. There are no spoons,
only hands to mix grains and river water.
The street is her open window,
her furniture the battered chair tipped
on its side, a cupboard of sorts for bent pans.
She is the smoke stained wall
and crouches under a large sign
in English, “Choice Shampoo.”
She is the big toe that grips the ground.
Nearby, are bits of denim,
foreign labels, and one bright, upright yellow pear.
Back straight, she does not slouch,
looks directly at the camera in a half smile.
She is the pierced diamond
carried in the side of her nose
and the red spice she holds to mix
with her evening meal. She is
the memory of golden flocks on hilly flanks,
the darkness of things being burnt,
surrounded by things already burnt.
Her only book, a book of matches,
her tablet: the wall, her pen: bits of charcoal.
She doesn’t worry if her seeds
are not planted by the spring equinox.


(first pub. in The MacGuffin) 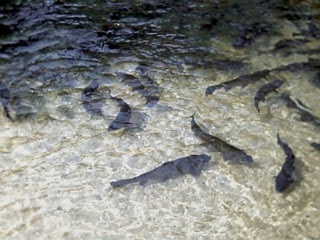 we dismantle the koi pond
where off-kilter birds feed

past schools of blue gills darting
and swaying in sunlight.

to disengage from reality, eat
nothing fill up on nature's shadows.

images in creek water bend
along the shore, sounds
like sighing reverberate

tumble over glistening rocks.
the sweet smell of mud
as it settles to the bottom

washing away the gleam
of fools gold. you taste tears,

salty drops dripping, undulating
eddies, and an image of truth.

are bottom feeders
in a world
where off-kilter
radiance feeds.

—Medusa, with thanks to today's chefs in the Kitchen [click once on photos to enlarge them and see the baby bluebird about to jump out of the nest], and a reminder that Jeanine Stevens will be reading at Keynote Books and Records in South Lake Tahoe tomorrow night, Thursday, July 17 at 7pm. Also: don't forget to check out Medusa's Facebook page for our latest album, this one of last Monday night's reading at Sac. Poetry Center: Tuesday Night at Monday Night by Michelle Kunert. 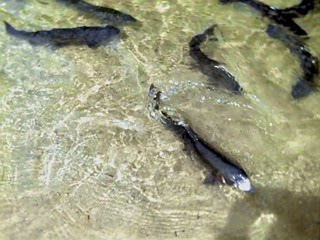 Posted by Kathy Kieth, Wrangler-in-Chief at 6:35 AM