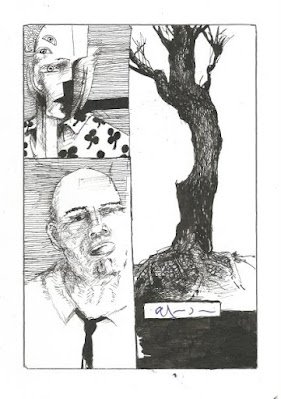 Pathetic fallacy at work—
precipitate, short tempered squeal,
a fall-out from the murk above,
all hail the temper of the steel,
ice shards thrown, anvil-beaten cloud,
cumulonimbus building climb,
no pity those who lie below,
berserk attack, fury unleashed.

But if our blame, beneath assigned,
the stain, false witness borne in lieu,
excuse for how our tempers flew,
then high and higher, pressure brewed,
until they flailed, akimbo style,
occluded front, way forward barred,
teeth gnashing, grinding, rage exposed,
an arctic wind, flow roundabout.

That’s why the weathervane is used,
even in Mary Poppins rôle,
to shift the focus from ourselves
and blame the heavens’ undertow.
The blues not named for summer skies,
depression for low’s isobars;
our stress must be where love revealed—
it’s fallacy, no choices ours. 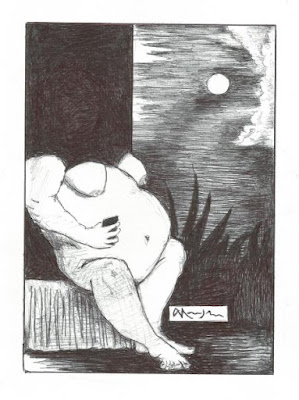 putting out berms to pause the tides
shuttering windows from the storm
replacing old weatherproofing, worn both sides
fresh batteries for the radio, to stay informed

blessed to have more than just a tent
the bills are paid, though not paid off
what dreadful fate have we been sent:
is that disease, or a minor cough?

exponential statistics grow
to quantify the damage done
more rain, more wind, more feet of snow
while our main concern is number one 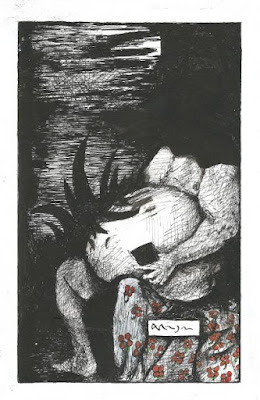 BENT BUT NOT BROKEN
—Caschwa

so that the hard parts that can’t bend won’t
break, either, just flex in a manner that keeps
everything together

hopefully our Constitution was fashioned in
this manner, because our melting pot of
different cultures also carries with it the need
to allow for release of

regrettably the news-for-sale-to-highest-bidder
media keeps the focus on just those parts that
don’t bend, like politicians who refuse to
negotiate, or extremists whom we can’t modify,
and leaves us to wonder how we ever got this far 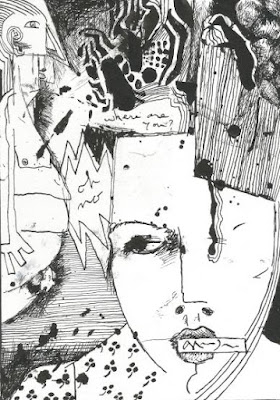 UNITED, WE GET BEEPED
—Caschwa

(after watching the Late Show with
Stephen Colbert, Jan. 10, 2022,
where comedian Tig Notaro would
repeatedly get beeped just for saying
the word “hole” following the word “ass”)


I could empathize, being a hopeless
A-hole myself some of the time, so
just to enlarge on the situation:

I started with the wrong B-hole while fastening my shirt,
munching on a tasty, little D-hole,
sidestepping that treacherous M-hole,
watching Alice disappear down the R-hole,
before inserting a woodscrew, I drilled a P-hole,
got lost in the B-hole of space,
watched soldiers in F-holes taking fire,
hope the street crew will fix that P-hole,
wrapped it all up by visiting my favorite W-hole. 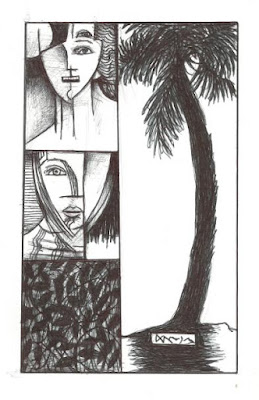 In this serge of Covid infections of the Omicron variant
I guess, yes, I’ve become a "Covid-phobe" at the place where I work
I’ve said that, if anyone comes to the warehouse work floor without wearing a mask,
one better not be sick and not be going around coughing on other people
Frankly, at work I never thought I’d get in a fighting argument with an anti-war peace activist
but he declared himself an “anti-masker"
and openly and loudly hacked on other people, unmasked and without apology
I nicely asked for him to please stop his behavior
but he gave me no respect for my request
and so I became called a “dumb-ass” and felt the hate
I also hated to destroy any friendships I had before Covid
because of this guy's germ-warfare terrorism coming out from his cigarette-smoke-affected lungs
Alas, I have to report those in such Covid denial to the administration
But I do wish that Covid rules enforcement would have a voluntary component
because I don’t want where I work to have to be placed on another shut-down
I wish to have what the security at the Woodstock concert declared—
they had a  “please force” (a  p- l- e- a- s- e  force) rather than a police force
where people take care to respect one another
and are willing to do their share to help stop the spread of Covid at work
But here in America, there are still those who want to commit outright sabotage
rather than see how they can cooperate and unite during a time of struggle 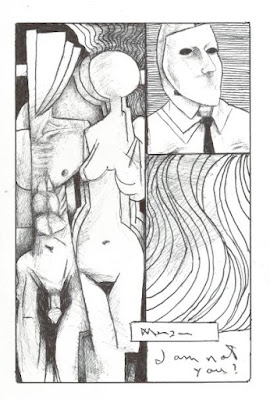 Mama-yama,
No drama, please!
We need to stay
At ease.

Crying daydreams,
Mask your sneeze.
Pray for mercy
On your knees.

We’re in for
A long haul.
Resilience,
A virtue,
We’ll all need. 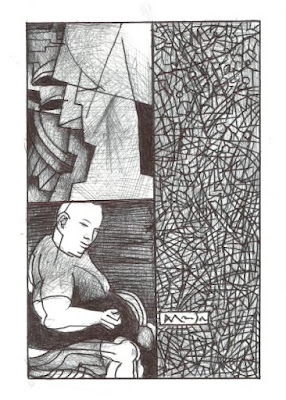 I bought shares
In the Old Stockade,
Hoping to fill it
With prisoners.

Per diem,
Per capita,
Per prisoner,
From the State
Could make me a
Wealthy peasant.

Like chickens
In a chicken-coop,
Daily
Laying
Out eggs,
Easy for a farmer to grasp
And turn into
His breakfast.

I don’t care why
They were
Sentenced to jail
Or for their
Rehabilitation,

I only care
To profit, therefrom,
Since wealth
Is my ambition. 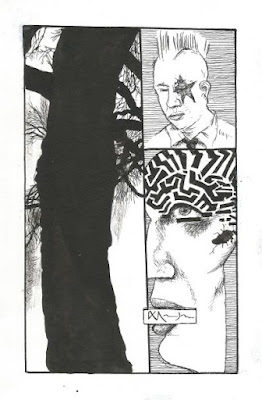 Some muddled thing
I can’t understand,
Disrupted our meeting,
And thus, I was banned
From polite society
And all it imbues—
Condemned to wander
Alone in the blues.

It’s beyond my means
To make sense of it all,
I lack some software
Scissors or awl,
Can’t put it together
Or take it apart,
Must be some problem
With the shape of my heart.

One day I will find the right words, and they will be simple.

Much as I lean toward spring, winter is by no means over yet. So we have poetry about our Seed of the Week: “Angry Winter Nights”, and thanks to our poets from Wales to Sacramento for their responses. About his poem, “Bent But Not Broken”, Caschwa writes, “Some four decades ago I worked at the headquarters branch of a savings & loan on Miracle Mile in Los Angeles. They had a 27-story office tower, with a heliport on top, that had rollers at the base so that forces of nature could cause the structure to sway, not break and fall. Hence, my poem.” 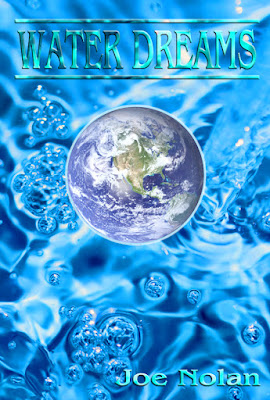 As for Joseph Nolan, our poet who finds such interesting photos to hang up in the Kitchen, he has a new book out from Cold River Press: Water Dreams. Check it out at www.coldriverpress.com. 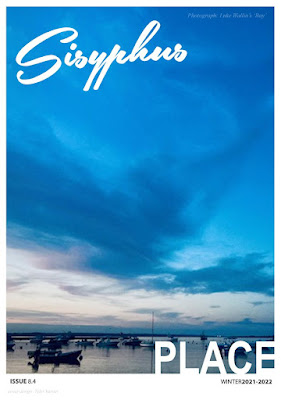 Sisyphus, Charles Entrekin’s magazine that “focuses on contemporary issues surrounding art, culture, and language”, has a new issue of poetry and prose and prose poetry (“The Place Issue”) online at sisyphuslitmag.org/. Very elegant, as always. 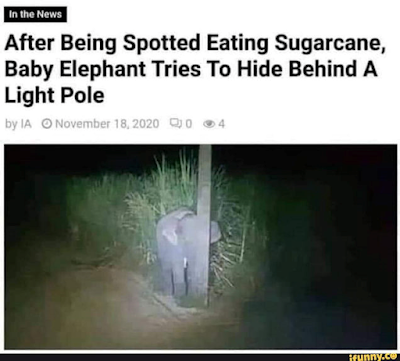 Would you like to be a SnakePal?
All you have to do is send poetry and/or
photos and artwork to
kathykieth@hotmail.com. We post
work from all over the world, including
that which was previously published.
Just remember:
the snakes of Medusa are always hungry—
for poetry, of course!