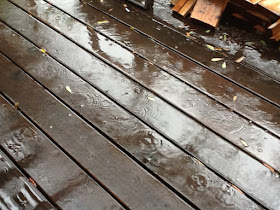 
ZEBRAS, AND WHY THEY PROBABLY DON’T LIKE YOU
—Kevin Jones, Elk Grove, CA

“Circus zebras run loose in Oakland,
After similar escape in Philly.”
The headline in the San Francisco
Chronicle gives the facts,
As a good paper should,
But not the why.
Does the media even
Do that anymore?

Zebras are notoriously
Ill-tempered beasts, and
Why not?—beautifully
Striped, you’d want
Shoes, leggings, hats,
Bags, and a bag for
Your school lunch.

Doesn’t work.  They don’t
Like you. Won’t serve you,
Won’t be trained.
And will most likely
Kick you, and also
Spit in your eye.
You were warned.

If they really wanted to
Be an animal in a peaceful
Poem (The lion will lie down
With the lamb, but the lamb
Will keep his phone on),
There would be
Teams named the Zebras,
Elegantly striped boats.
Won’t even mention
Bowling teams.

Zebra has its own agenda,
And is far different from yours.
As Bukowski says about
Something else entirely,
Or maybe not:
“Don’t even try.” 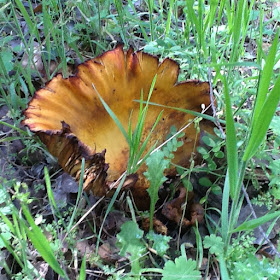 (for Edward de Vere, 17th Earl of Oxford, forced to renounce
all title to the authorship of the Shakespeare plays)

“Sometimes the title is the last to come.”
—observation often stated by poet James Merrill

Sometimes the title is the last to come.
What need have you of title? Every day,
from lightning lines you gave us our ears hum.

Just think: “To the manner born,” “Husband, I come.”
Snatches, like “things nothing worth”; “give o’er the play.”
Sometimes the title is the last to come

or the first to go. So intricately dumb,
you dispensed with lands and power as one sells plate,
but you gave us those lightning lines, and our ears hum.

Your rod can reach still darker, deeper to plumb
than world exists to be thrust through while time remains.
Sometimes the title is the last to come,

but come it must someday, as truth must enter, sun
stunningly crowbar the grate of the dungeon brain.
The ears you gave those lightning lines still hum

and buzz: mad King Lear with self-knowledge numb,
that old busybody by the Dane’s sword slain,
yet sometimes the title is the last to come.

The everlasting title taken from
you, we would restore—but that, you did convey.
Though lightning lines of yours make our ears hum,
sometimes the title is the last to come. 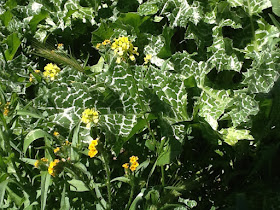 THE “SHAKE-SPEARE” LETTERS: OF THE QUEEN’S TIN MINES
—Tom Goff

For they must all be mask'd and vizarded…
—Shakespeare, The Merry Wives of Windsor

The real Shakespeare, De Vere, the Earl of Oxford,
sees Queen Elizabeth, elderly, just as she is;
capricious and vain, disarming in turn each lord
so none can yet pry the realm from her slackening fist.

Yet he deems himself loyal, the overlooked unrewarded:
proposes to rent her Cornish tin mines, to serve
as her ever-vigilant middleman, check tricks and swerves
and dodges wherever the merchant scoundrels have darted;

in short, to recover her riches skimmed in small rivers,
where the smelting and coining has puddled in leftovers
plucked up just-cooled before the Queen’s comptrollers
can seize what’s the Crown’s by right, and not the free-livers’.

Hard to tell if Oxford’s projected sums are correct.
What truth, like Lear’s hard-won truth, in his promises?
He’ll employ more poor Cornish workmen: does this ring echt
or counterfeit? Deep as Her Majesty’s tin-stamp presses,

these offhand pen-strokes convince. Not mere Elizabethan.
Are these rough notes, or laborsome petitions?
They’re clearly Shakespeare. Oxford jots instant visions
as they take wing, bundling in one little reason

clusters of Bardspeak. Vivid: his pen has caught
underhand merchants who waylay slabs of tin,
stamped with England’s Lion expressly to be bought
abroad, now bartered for household wine and like sins.

Or listen to Oxford speak of the melting of metal,
evoking the fiery tin running into the mold,
and how that liquid, red-hot as becomes fresh gold,
pours into the subject of the tin-suits, the “little,”

the “great,” and how from these suits “many rivers run.”
How “the wealth of the prince is the riches of the commonwealth”
(the vowel-shapes build up a Shakespeare-like arch of expression),
then hear the outsider Earl describe courtly stealth:

how crafty (Iago-type?) schemers and malingerers
can “carry it”—the tin suit—“so cunningly that they will juggle
it so clean out of Her Majesty’s fingers
as she shall never have any sense or feeling thereof.”
No struggle

so great as the Earl’s to urge a queen to her own profit,
to strip the kingdom of pickpockets. No luck,
save what we now get, Shakespeare’s letters. Prophet
scorned venturing out of his word-kingdom. We’re struck,

though, when Oxford describes the tin-mines suit
in Hamlet’s-Gravedigger terms: it has “three branches.”
(An “act” and an “argal” would clinch the resemblance.)
Most startling of all the convergences, to boot:

“These branches then are only to be set
afoot, masked, and visored so that they in nowise
seem children of the first [suit] whereof I have spoken.”
When last did we hear such masked words? Below guise

of what visors have we previously met such tokens
of mischief?  Is it not Shakespeare’s child-players set
afoot in pursuit of a worthy stage/stooge, and all laugh?
Is not the Merry Unwife of Windsor, Queen Bess,

translated into her prime comic butt, Sir John Falstaff?
More somber details the Earl has to express:
he relates, with a dash of mystery, perhaps a slight shame,
his misfortune (like “Shake-speare’s”): he’s lately grown lame… 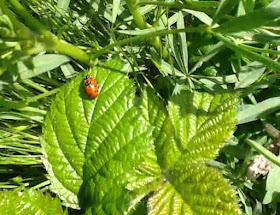 Imagine the intricate maneuverings,
the balance of bodies—wings for the moment
useless—as the two of them, ladybug
and her gentleman-bug, red-robed with their
clan’s ancestral black insignia (don’t
call it polka-dots!), perform their prehistoric
dance, joined together on a trefoil leaf
of blackberry-bramble almost lost in spring
green, then moving still in unison
up a neighboring stalk and onto a finger-leaf
of lupine, all in the service of perpetuation
of species through the ages, the future,
the luck of ladybugs. 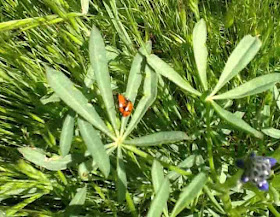 By night he becomes time-lapse philosopher
of the alley just off Main, convergence
of realms known chiefly to cats, pigeons, owls,
those of the swivel vision who leave their spoor
and follow their hungers from treetops
down the stoops, off fire escapes, parapets
and windowsills the cockeyed way. He squints
to read messages in the precise angle of Polaris
with gold-rush cobble and backwards neon H
of the town’s 3-star hotel reflected, topsy-turvy
geometry construed to make sense of it all.

TURN IT OFF
—Taylor Graham

Afterimages keep developing
in the mind. Click off the TV, another
blast turning everything black on white, light
shivered through glass. Suicide
bomb or quake
gas explosion the earth keeps shaking.
All the speechless words the death count.
Concrete—stuff we walk and trust and build
on—shards in terror-tells. Living rooms
smell of concrete dust sifting as the mind
takes pictures, focus shattering
arms grasping for air—
floors dangling from a ceiling—a mirrored
face in smithereens. Like memory
the camera lies. A hand reaching for another
hand is hard to keep in focus
after the shutter the light changes. 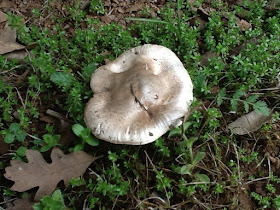 BORN ON A FRIDAY
—Taylor Graham

Dark ascent into air. How long before
you learned the slow cycle of lights and shades
in this oddly differentiating universe, its
stops, starts, strictures, separations.
Its diminishing dawn into noon and after,
into the next evening. You, a being of always-
light, abruptly gnawed by thought
needing words in a language so foreign.
Hunger. Howls. Human
more tangled than Coyote or Fox. Thoughts
themselves skittering away. You let your
self be sung to sleep; born-blood,
breath echoing from inside yourself
the rush of world beyond you, its life-long
longing to find your self again whole. 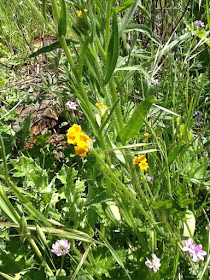 DOWN BY THE CREEK
—Taylor Graham

Gather mustard greens for supper
and digital flowers to take back home.
Industrial-lace thistle
still glitters silver with dew.
Make music on a golden fiddle’s neck,
each tiny trumpet
imprisoning the light. Listen
for secrets of silence above the water’s
flow. Catch a clump of elf-
umbrellas. Eat one, savoring how
it saves from scurvy and the daily-do.
Can there ever be
too much sun, too much rain?

HOLDING IT TOGETHER
—Taylor Graham

The geese are flying wild circles above this
derelict place, calling like the ghosts of the attic
above what used to be dance floor. Dead
now. The geese are alive, weaving their cries
a loud breeze through grasses crazy with spring.
The building’s held together by bits of mortar,
bats that haunt the eaves. A room webbed
by its own spider. Bricks give up to mosses.
The whole world’s wet with green.
My dog pulls me across sodden meadow,
she’s grounded in grass pulling me airborne
above the creek. Alive the geese hold the whole
place together. As the oak leafs out it sings. 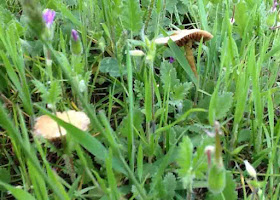 Some say the world will end in fire,
Some say in ice.
From what I've tasted of desire
I hold with those who favor fire.
But if it had to perish twice,
I think I know enough of hate
To say that for destruction ice
Is also great And would suffice.

Thanks to this morning’s contributors for their fine breakfast buffet, including Taylor Graham for the pics as she continues to stalk those wild, fleeting fungi and, as a bonus, catches a little ladybug sex.

This week brings us several readings, as always: tonight we have Poetry in Motion in Placerville and Phillip Barron and Jane Gregory at Sac. Poetry Center; on Weds., SPC hosts a lecture by Jonas Cope on Shelley; on Thurs., travel down to Stockton for a book launch by David Waldon. Then on Sunday you have a choice between Poetry at Einstein in Sac. (Bethanie Humphreys, Heather Judy, and Bob Stanley) or Carol and Laverne Frith reading at Mosaic of Voices in Sac. and releasing Carol's new book, Early Echoes (FutureCycle Press). Our poetry life is great—so many choices! Scroll down to the blue box (under the green box) at the right of this column for all the details.

April is National Poetry Month, which begins this coming Friday. There are lots of resources for NPM which are listed in the top of the green box. Have a peek at ‘em! (And let me know if you find any more.)

And also check the red Webilicious section at the bottom of the green box This You-tube video is of the Medusa thrill ride at Six Flags. Click on the web and be ready for the rolly-coaster that is Medusa! 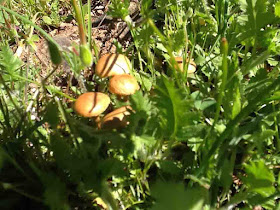