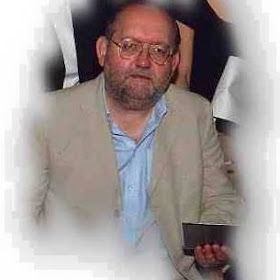 mythic streets evaporate at dawn,
leaving only complacent memory
to recall imperfectly those scraps
and oddities of ephemera that
defy rational explanation;
a pristine franked letter posted
in Folkestone 1841; several ornate
glass marbles that were a birthday
present to some Rhineland princeling;
the signature of Thomas Alva Edison
on a page awkwardly torn from a
Hotel register omitting its name,
the building itself demolished long ago;
a skeletal frame of a Penny Farthing
half buried amid the inconsequential
detritus of the communal refuse tip;
a yellowing poster of a once well known
brand of cough syrup, the discernible lines
of a now defunct city tram route;
And somewhere, the presence of an
inveterate aesthete and poet of civic
renown struggling to evoke a nostalgia
amongst those who had not read Borges
nor knew of his blindness. 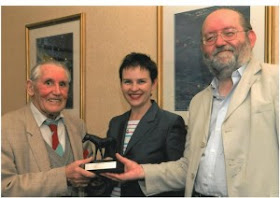 June 2008, The Right Honourable Walter Harrison
(former Member of Parliament for Wakefield), Mary Creagh
(current M.P. for Wakefield), and Louis. A formal inauguration
of Mary as Official Patron of the Black Horse Poets of Wakefield.

FACE IN THE PICTURE

PORTRAIT OF GENERAL AFTER BATTLE

Smoke wreathed distant battlements,
skies flecked with iridescent amber,
fluttering banners and icons held aloft;
in the foreground
clad in burnished breastplate,
circumferenced by a scarlet sash
a warrior’s imposing stature unfeigned,
lacking the air of braggadocio
conveyed in earlier portraits,
pensive eyes glower from
the bearded visage
its contours grown greyer;
his right hand grasps the
ostentatiously plumed helmet,
in his gauntless left hand a
crumpled map torn at one corner,
overhead crows circle,
to his right riderless horses
are being led away,
his own steed lost amidst
the onslaught that some would
of necessity deem glorious,
lest they unlike the artist
cause posterity to question. 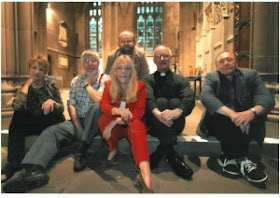 lemonade on the verandah after supper,
discussing Rousseau and Voltaire
before retiring to the soft embrace
of an easy langour;
expecting tomorrow and its harvest
of promise, the lush savannah
the tall sheaves and sturdy horses;
and yet that tomorrow never came,
no matter how much we believed
and what we believed was enough,
but what they believed was much more;
so we recall with wounding monotony
the men of honour whose sabres broke
too soon, the chivalric figures whose
steeds wearied in the long campaign;
we recall shards of splendour smashed
held captive in museum-cased aspic,
marble, ballroom, chandelier, satin, lace, and
a haunting echo of terpsichorean melody
vanished and gone into The Wilderness;
“mene mene tekel upharsin” those heirs
of promise, weighted in the balance those
inheritors of substance and found wanting;
the vision of Daniel, the words of Ezekiel,
prophetic and predestined, and…
lemonade on the verandah after supper,
discussing Rousseau and Voltaire
before awakening to the dawn of
a day resplendent,
Confederate
and grey.

DISPARATE THOUGHTS ON MY BIRTHDAY

Shall we fail or shall we
try to achieve a little before
we fail in any case;
If we forget the words
to a song won’t it
get sung ever again?
Putting our hand up first
with the answer
we invariably incur the wrath
of the dullards behind us,
who wait in perpetual dread that
they might be called upon to think;
Do we try to extinguish the candles
on our birthday cake one by one
or all at once?
what gain is there if one is left
to flicker flicker alone and serene
amid the encroaching gloom. 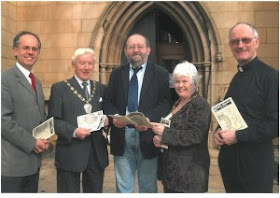 April 2005 Official launch of "Poetry Wakefield" magazine,
a quarterly publication for all schools in the city and district
and Diocese schools. Deputy mayor and mayoress
in attendance, together with the Dean and
an official of the local Council's
education department.

Did they offer you a thought
for all your pennies?
did they want your gold
in exchange for a goose’s egg?
did they swap your silver linings
for a sky full of clouds?
Would you trade your last dollar
for their word of honour?
Do you keep all of their promises
in a jar ready to use on a rainy day?
and all of these things
they saw but they did not see,
they heard but they did not hear,
and they knew,
they knew it all
but still they tried not to know.

Opportunities like seagulls in flocks
have flown by,
precious moments and chances
whipped away suddenly from our grasp,
sent whirling skyward
into ethereal anonymity,
revealing an emptiness
of purpose
exposing a hollow shell
cracking at the seams;
whispers shall be our deliverance
but not for a while yet,
and the mists of morning
accompany us with their dull cadences
which we often mistake for unwarranted approbation;
there is neither failure nor success,
neither defeat nor triumph;
our gilded shields and splendid spears
have rendered nought
but an inheritance of tears;
Somewhere in the drowning stream
as the Sun sets and encroaching night
begins its long slow asphyxiation
of what we thought was our day,
a solitary flower is placed carefully
on an unmarked grave in a church yard
at the edge of the coming Storm. 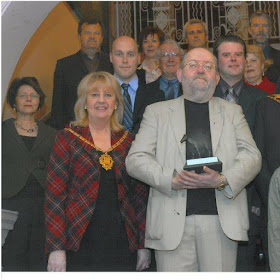 Louis with an Honorary Civic reward made by
the Mayor of the City of Wakefield at a Civic Reception
hosted in honour of his Black Horse Poets group in March 2008.

There is a ticking sound
and it is the slow ticking
ticking away of our lives;
each day is a ticking bomb
which we need to defuse,
and having accomplished that
the very next bomb starts ticking;
What life actually is,
is not about dealing with
one bomb at a time,
but rather
we are confronted by,
and find ourselves
in the midst of,
a whole room full
of ticking bombs;
and theirs is the slow
ticking,
ticking away…

A drop is rainfall
Rainfall is a drop,
A leaf is windfall
Windfall is a leaf,
A grain is harvest
Harvest is a grain,
Lack is plenty
Plenty is lack,
Absence is attendance
Attendance is absence,
Happiness is suffering
Suffering is happiness,
Achievement is failure
Failure is achievement,
All is nothing
Nothing is all.

This morning’s poetry brunch is from England, clear across the pond! Welcome to the Kitchen, Louis Kasatkin, who writes: in my spare time I am a civic, community, and political activist, a blogger and general nuisance to the status quo! I’m currently Editorial Administrator at www.destinypoets.co.uk, which is the growing and successful website of Destiny Poets UK, of which I'm also the Founder. This particular groundbreaking project/undertaking comes in the wake of and as a qualitative development from all my previous successful works and promotions. I was the very first Poet-in-Residence to be appointed to such a post anywhere in the World of Professional Rugby (both Union and League) in November 1999 at Wakefield Trinity Wildcats. As a follow-up to that, in April 2001 Wakefield Cathedral appointed me the very first Poet-in-Residence at any Church community in the UK. In 2002 with private sector corporate funding, I founded the The Cathedral Poets at Wakefield. I'm proud to be serving currently on the Board of Senior Editors at episteme, the online academic journal of Bharat College, Mumbai.

Thanks, Louis, for the poems and for the snapshots of poetry life in Wakefield, England—and don’t be a stranger! 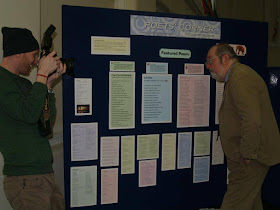